Hello everyone, and welcome back to The Bookworm’s Fantasy! I hope you’re all doing well. Today I’m going to be posting my review of Caroline Kepnes’s ‘YOU’. I really enjoyed this novel, and devoured it in just two days. So, keep reading to find out my thoughts… 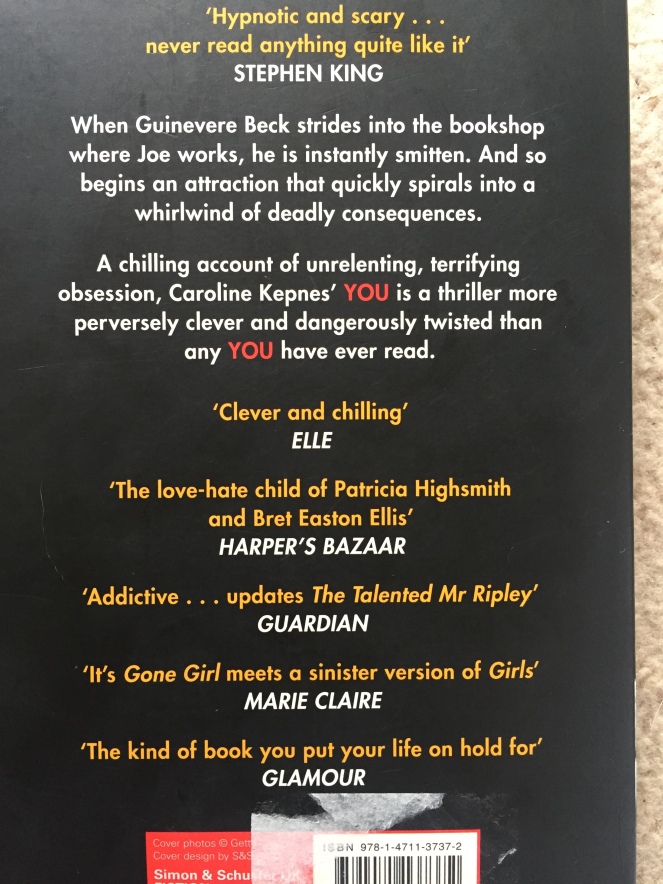 ‘YOU’ is Kepnes’s debut novel and was released in June 2015. Since then, she has also written ‘Hidden Bodies’ (June 2016). Kepnes previously worked as a pop culture journalist on Entertainment Weekly and was also a TV Writer for 7th Heaven. She now writes full time and lives in Los Angeles.

‘YOU’ has received tremendous praise, and a 10 episode TV series based on the novel will premiere on Lifetime Network in 2018. Sunday Mirror said “This debut is creepy indeed – and extremely entertaining,” Daily Mirror stated “If you only read one new thriller this year, make it this one,” and USA Today pinned it as “Chilling and unrelenting.” Many authors also loved the novel, such as Sophie Hannah: “Brilliant thriller with attitude, guts and true insight into the nature of obsession,” and Stephen King: “Hypnotic and scary…never read anything quite like it.”

‘YOU’ tells the chilling and dark account of the narrator Joe’s obsession with and stalking of Guinevere Beck. She ventures into the bookshop where Joe works one day, and he is instantly drawn to her, and so begins his obsession that can only end in disaster.

Joe, as you can probably already tell, is a troubled and damaged character. He feels the need to both control and possess Beck, and will do anything it takes in order to do so. He will stop at nothing to get what he wants, and it’s clear from the beginning that the story will end in disaster. His narration is dark, troubling and uncensored, and as a reader it made me extremely uncomfortable at times. He’s very open about his wants and needs, and does not seem to be aware of his own problems or issues as a character, and his jealousy drives him to commit some terrible acts. However, I found Joe’s account fascinating and interesting, and became totally absorbed in his head.

Beck is a confusing and complex character. She acts out of impulse and emotions, and at times appears to be extremely selfish. She’s very hot and cold: she wants Joe and then she doesn’t, she craves company but then isolates herself from everyone around her. She’s conflicted, but ultimately just wants to be happy. She eventually realises that Joe is not the man she thought he was, but is it already too late?

None of the characters are particularly likeable in my opinion. Other minor characters include Benji and Peach. Benji is a “friend” of Beck’s, with whom she has an ongoing, but inconsistent, intimate relationship with. They are both uncommitted to each other, and their relationship is confusing. Peach is Beck’s best friend, who is also incredibly controlling and possessive of her. Beck always runs to Peach in times of need, and their friendship is very unhealthy.

** TRIGGER WARNING ** (I apologise for any spoilers here.) This novel contains scenes of explicit acts of both physical and sexual violence, including references to non-consensual sexual acts. It also explores the themes of substance abuse and mental illness. If any of these issues may be triggering for you as a reader, I would suggest that you skip this book.

As the narrative motors forwards, Joe’s obsession with and stalking of Beck grows and grows, and this drives him to carry out some terrible acts. He makes a few foolish mistakes along the way, but ultimately will do anything to have Beck all to himself. The narrative gets darker and more disturbing as it goes on, and some of the events that happen are extremely shocking and troubling. It’s a very uncomfortable read throughout, and it made my skin crawl so many times.

So, let’s talk about the ending. The ending came as a surprise to me, and I really did not expect the resolution that the reader is faced with. There’s a dramatic end scene in which Joe’s impulses and wants completely overtake all rational thinking, and it’s clear from the beginning of the scene that something awful is going to happen. While it came as a surprise to me, the ending was plausible and I did enjoy it.

My only criticism with the novel is that, at times, I did question the consistency of Joe’s character and questioned some of the choices he made in regards to how his character had been presented beforehand. At times, I was confused by his presentation as a character, but for the most part it was pretty solid.

Overall, I highly recommend this novel to those of you who like much darker Psychological Thrillers, particularly if you enjoy being inside the head of the perpetrator and reading events from that perspective. I was completely hooked whilst reading this, and read it in only two days. Prior to reading this, I would suggest that you prepare yourself for an uncomfortable and unnerving reading experience. That being said, this is a very good read and I hope ‘YOU’ enjoy it as much as I did!

11 thoughts on “Book Review: ‘YOU’ by Caroline Kepnes”