Hello everyone, and welcome back to The Bookworm’s Fantasy! I hope you’re all doing well. Today I’m going to be posting my review of Helen Fields’ latest addition to the D.I. Callanach Thriller series, ‘Perfect Prey’. I recently took part in the blog tour for this (which you can find here), and ended up enjoying the novel so much that I had to review it separately for you! So, here goes… 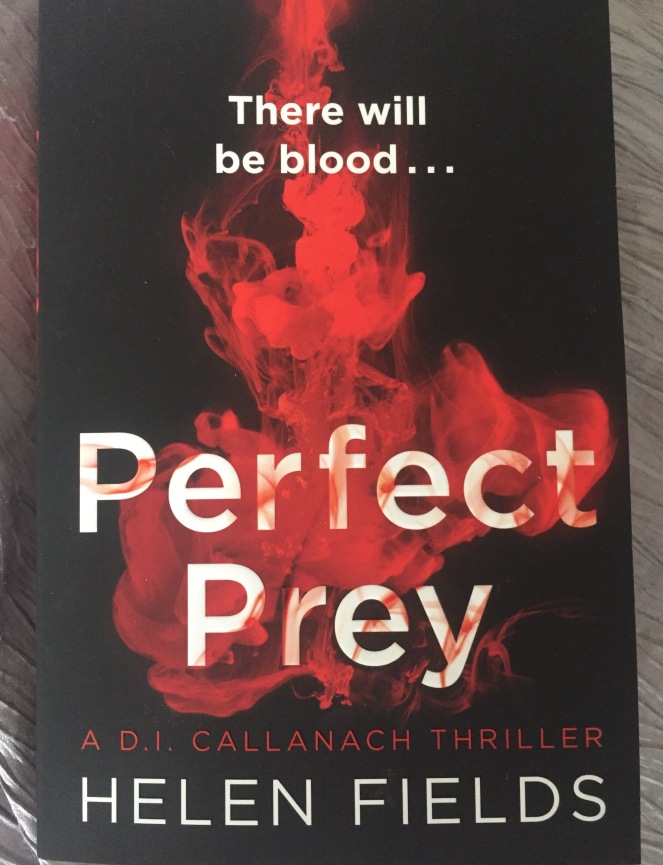 In the middle of a rock festival, a charity worker is sliced across the stomach. He dies minutes later. In a crowd of thousands, no one saw his attacker.

The following week, the body of a primary school teacher is found in a dumpster in an Edinburgh alley, strangled with her own woollen scarf.

D.I. Ava Turner and D.I. Luc Callanach have no leads and no motive – until around the city, graffitied on buildings, words appear describing each victim.

It’s only when they realise the words are being written before rather than after the murders, that they understand the killer is announcing his next victim…and the more innocent the better.

** TRIGGER WARNING ** Contains references to scenes of a sexual nature, and also contains explicit references to barbaric acts of violence and murder throughout.

‘Perfect Prey’ was released on 27th July 2017, and is the second edition to the #1 bestselling D.I. Callanach Thriller series, following on from ‘Perfect Remains’ (January 2017). Helen Fields studied Law at university and practised law for a number of years, before going on to run a film production company. She then moved towards writing as a profession.

The series has received much positive praise. Woman’s Way Magazine stated “Without a doubt, this is one of the best detective series I have read,” and Saga Magazine labelled it “Genuinely chilling.” ‘Perfect Remains’ also achieved fantastic reviews, for example from Closer: “With nail-biting twists at every turn, [the novel] will have readers gripped from start to finish” and author Paul Finch: “A fast and enthralling thriller, pitting a new, very human hero against one of the scariest psychos I’ve yet encountered in crime fiction.”

From the very first page of ‘Perfect Prey’, I was completely hooked. It details the gruesome, chilling murders being committed across Edinburgh, all starting at a rock festival in the city. D.I. Turner, D.I. Callanach and the rest of the team must work together to catch the killer, and are absolutely pushed to their limits in doing so. But will they catch the killer in time?

The narrative is written in the third person throughout, and each section/chapter focuses on a different character. Part One follows members of the team as they work to catch the killer, and Part Two introduces the killer to the reader. The reader is given an insight into many aspects of each characters’ lives and work, and all are explored in great detail.

The two main characters in the novel are Callanach and Turner. D.I. Luc Callanach has authority and power, and he pushes himself to his limit in order to save the lives of those around him. He’s an expert in his field, but even this case may be too much for him. D.I. Ava Turner is attempting to juggle both personal issues and the investigation, and she struggles to balance the two. She puts everything into her work, but has a few setbacks along the way.

Other members of the investigation team include Salter, Tripp, Begbie and more. We then have Ben Paulson and co, an expert in computer hacking who is brought in to solve the case, and Joe Edgar, who becomes his rival. And of course, the victims and their families also make an appearance in the novel. As you can see, there is a large overall cast of characters in the novel, but all are distinct and bring something different to the story.

As a side note, I really enjoyed reading the accounts of the murderer in Part Two. It was really interesting to be able to get inside the murderer’s head in that way, and the reader becomes uncomfortably close and intimate with them. It’s chilling and frightening to read, but I thought it was a brilliant touch to the novel.

** TRIGGER WARNING ** This novel details gruesome and barbaric murders committed by an unknown. Descriptions of the murder scenes and bodies are rich in detail, and many of the acts committed are disgusting and inhumane. The novel also contains references to scenes of a sexual nature. If any of these issues may be difficult for you to read about, I suggest you skip this book.

As the narrative motors on, the investigation team must work around the clock in order to attempt to solve the case before another innocent life is taken. More murders are committed, each one equally as gruesome and violent, and the team begin to worry that they are running out of time. Resources and officers are stretched to their limits, and there simply aren’t enough hands on board to solve this complex and confusing case. Will the team achieve it, and can they stop the murderer before it’s too late?

So, let’s talk about the ending. The ending is jam-packed full of action and suspense, and it’s exhausting to read! All the events of the novel come to a head, and the team pretty much reach their breaking point. All of the characters are under a ridiculous amount of strain and pressure to solve the case, and it’s hard to predict exactly which way it’s going to go. There’s a shocking twist which I definitely didn’t see coming! However, I was really satisfied with the ending and very glad that things turned out the way they did.

Overall, I highly recommend this novel to those of you that enjoy crime novels, particularly murder-mystery. The novel is full of action and suspense, brilliantly-constructed characters and an unbelievable ending – what more could you want?! My only criticism is that, on a couple of occasions, I did find myself getting lost in all the sub-plots. But that being said, this is a fantastic novel, and I urge you all to read it!