Hello everyone, and welcome back to The Bookworm’s Fantasy! I hope you’re all doing well. Today I’m posting my review of B.A. Paris’ fantastic new novel, ‘Bring Me Back’, which is actually published today (8th March 2018). I took part in the blog tour for this book last week – you can find that post here. Keep reading to discover my thoughts… 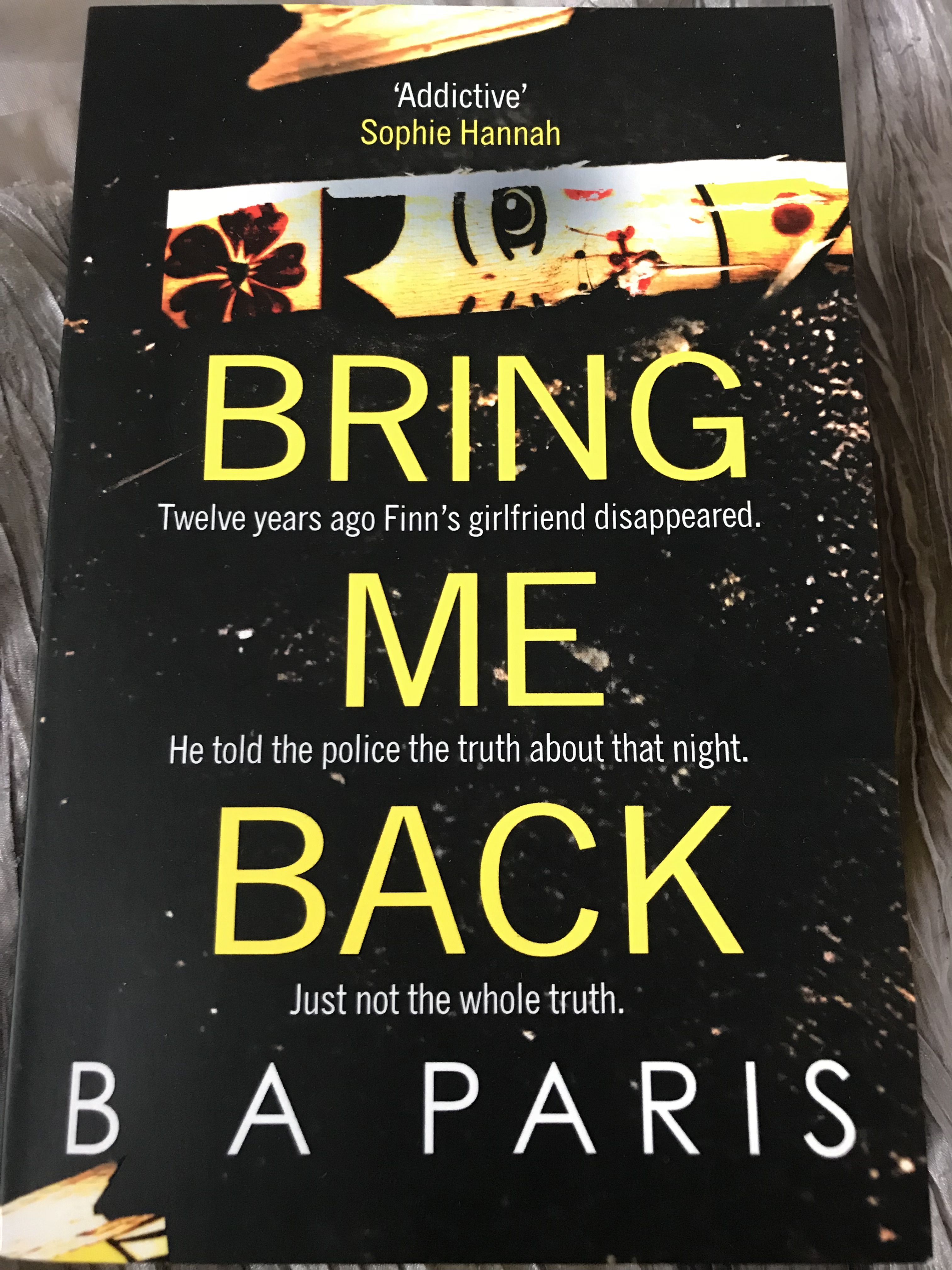 The Suspicion
He told the police the truth about that night.
Just not quite the whole truth.

The Fear
Now Finn has moved on.
But his past won’t stay buried…

‘Bring Me Back’ (8th March 2018) is B.A. Paris’ third novel, after ‘Behind Closed Doors’ (2016) and ‘The Breakdown’ (2016). Paris lived in France for many years, but has recently moved back to England. She previously worked in an international bank, before re-training as a teacher and setting up a language school. She lives with her husband and five daughters.

The novel has received fantastic reviews from fellow authors, such as Lee Child: “We’re in a new Golden Age of suspense writing now, because of amazing books like Bring Me Back!”, Sophie Hannah: “An addictive new voice in suspense fiction”, Claire Douglas: “Clever, addictive and twisty, I couldn’t sleep until I found out the truth”, Jane Corry: “BA Paris has a knack for getting into your head” and Amanda Robson: “A perfectly crafted work of art, seamless and mesmerising”.

‘Bring Me Back’ is a Psychological Thriller novel full of suspense and mystery. It follows the protagonist Finn, whose girlfriend disappeared twelve years previously. But the events of that night have come back to haunt him, in the most astounding way…

The narrative is mostly told from the first-person account of Finn, with part one switching between the present day (“now”) and twelve years previously (“before”). But part two also introduces the first-person perspective of Layla, Finn’s missing girlfriend. Part two no longer consists of time jumps, only of narratives switching between Finn and Layla’s perspectives. The use of the first-person gives the reader an all-consuming, intrusive insight to the lives of these characters – the reader really feels as if they are experiencing events along with them. I was hooked right from the beginning!

My favourite character in the novel is Layla. She’s quite a flawed character and makes a lot of mistakes, but I believe that this makes her very realistic. She’s strong-willed and determined, but is also fearful of her relationship with Finn. She’s a very “different” kind of character – quirky and unique, with flaming-red hair and an interest in collecting russian dolls. Some readers may disagree with me and think that Layla is a bully, but I personally just think she is trying to do what’s right.

The protagonist, Finn, isn’t a very likeable character in my opinion. He’s short-tempered and impulsive, always selfishly putting his own wants before his partner Ellen. It’s clear he still loves Layla, and he is not strong enough to resist the hold that the events of that fateful night have over him. He’s with Ellen for all the wrong reasons, and things go disasterously wrong for him – but I struggled not to think “I told you so”.

The other main protagonist in the novel is Ellen, Finn’s partner. Ellen is Layla’s sister, and often feels overshadowed by her. She and Finn are planning to get engaged, but when things begin to go wrong, she starts to doubt whether Finn really loves her. She loves her sister, but desperately wants her relationship with Finn to work. There is a relatively small cast of characters within this novel, others being Finn’s friends. But they all bring something different and unique to the story, and they all end up being pretty important in the end.

** TRIGGER WARNING ** This novel contains references to both physical and emotional abuse. Some of the abuse comes from Finn, towards both Layla and Ellen, but the novel also describes the childhood abuse that Layla and Ellen suffered from the father in some detail. Some of the scenes in which this childhood trauma is described are pretty uncomfortable to read – so if this may trigger a negative response, I suggest you skip this book.

Layla and Finn’s narratives motor onwards, both increasing dramatically in suspense and tension. Finn tries to work out the mystery between Layla’s disappearance – but this throws up a lot more challenges and curveballs. This is a very fast-paced novel, and it is truly addictive. The chapters are short and snappy, and the narrative is straight to-the-point, ensuring the reader is fully absorbed throughout.

So, let’s talk about the ending. That ending! There’s a massive twist near the end of the book that completely changes everything, and I definitely never saw that coming! Paris completely alters the course of the novel, and things take a totally opposite direction. The two narratives collide in the most astounding way! I was personally very happy with the ending – I felt that it tied together the events of the novel fantastically.

Overall, I highly recommend this novel to those of you who enjoy fast-paced, addictive Psychological Thrillers – the kind you devour in just a couple of days. I physically couldn’t put this book down, and even after reading it I can’t stop thinking about it! I’ve tried to find a fault with the novel but I just can’t, meaning it’s going straight to my “favourites” bookshelf. A truly fantastic read!

One thought on “Book Review: ‘Bring Me Back’ by B.A. Paris”