Hello everyone, and welcome back to The Bookworm’s Fantasy! I hope you’re all doing well. Today I’m posting my review of Sarah Pinborough’s latest Thriller novel, ‘Behind Her Eyes‘. I really enjoyed the novel for the most part! Keep reading to discover my thoughts… 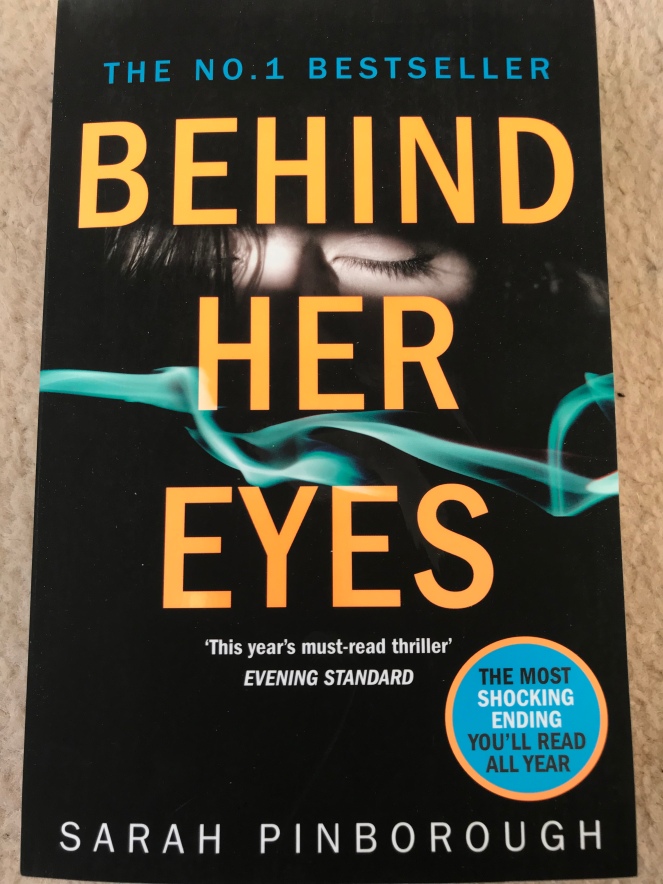 And whatever you do, DON’T give away that ending…

Since her husband walked out, Louise has made her son her world, supporting them both with her part-time job. But all that changes when she meets…

Young, successful and charming – Louise cannot believe a man like him would look at her twice let alone be attracted to her. But that all comes to a grinding halt when she meets his wife…

Beautiful, elegant and sweet – Louise’s new friend seems perfect in every way. As she becomes obsessed by this flawless couple, entangled in the intricate web of their marriage, they each, in turn, reach out to her.

But only when she gets to know them both does she begin to see the cracks… Is David really is the man she thought she knew and is Adele as vulnerable as she appears?
Just what terrible secrets are they both hiding and how far will they go to keep them?

** TRIGGER WARNING ** Contains references to mental illness, including suicide. Also makes references to various types of substance abuse (including drug use and alcoholism), and pregnancy issues.

‘Behind Her Eyes’ (January 2017) was a number one Sunday Times Bestseller and is one of Sarah Pinborough’s Adult Thrillers. She has written over 20 novels (many being YA or teenage novels of varying genres), including standalone novels and books in the series “Dog-Faced Gods Trilogy” and “The Nowhere Chronicles” (under name Sarah Silverwood). Some of her best-known novels include ‘The Language of Dying’ (2013), ‘The Death House’ (2014) and ’13 Minutes’ (2016).

The novel has received rave reviews, for example from Good Housekeeping: “Set to be one of the most talked-about books of 2017), The Sun: “Original and compelling, this is the very definition of a page-turner” and Guardian: “Fantastically creepy”. Many fellow authors also praised the book, such as Harlan Coben: “A dark, electrifying page-turner with a corker of an ending”, Stephen King: “Bloody brilliant” and John Connolly: “The most unsettling thriller of the year”.

‘Behind Her Eyes’ is a tense, suffocating Psychological Thriller all about the complexities of relationships and obsessions. When single mum Louise meets David, and his wife Adele, she is caught up in their whirlwind marriage and all the problems that come with it. She becomes obsessed with the couple, with disastrous consequences – will she realise the danger before it’s too late?

The narrative is told in the first-person, with each chapter switching in between the perspectives of Adele and Louise. The novel is also split into different times – we have the “then” narrative (describing current events), the “now” narrative (describing the characters’ past lives/actions), and right at the end the “later” narrative. The narrative also contains snippets of diary entries, written by the character Rob in his “sleep diary”. A complex narrative structure? Very much so, but it works so well!

Louise was by far my favourite character in the novel. She’s a single mother and is incredibly lonely – so she instantly takes a liking to the charismatic David. She’s hard-working and determined, and will do whatever it takes to make things right. She suffers with anxiety and paranoia and begins to become obsessed with Adele and David’s relationship. She’s not perfect and makes her fair share of mistakes, but this made for an extremely realistic and believable character. I really warmed to her, and felt her emotions as if they were my own.

Adele is a troubling, difficult character. At first, I really warmed to her and believed her every word – but it soon becomes clear that she has had a troubled past and doesn’t always tell the truth. She’s an extremely complex character, with much more to her than the reader may first anticipate. Her relationship with David is also extremely turbulent. He’s controlling and angry, and has a severe alcohol problem. At first, I really disliked him as a character, but it soon becomes clear that he too has many secrets lurking beneath the surface.

Other characters in the novel include: Rob (Adele’s childhood friend), Marianne (Adele’s ex-friend), Sophie (Louise’s best friend), Adam (Louise’s son), Ian (Louise’s ex-husband), Lisa (Ian’s new partner), and various co-workers of Louise’s and patients of David’s. All the characters within the novel are excellently-portrayed and bring something fresh and exciting to the story.

** TRIGGER WARNING ** (I apologise for any spoilers here.) The novel addresses the theme of mental illness, including some very complex illnesses. Many of the scenes take place in a mental institution, and the novel also makes references to suicide. The novel also portrays various types of substance abuse in much detail, including both alcoholism and drug abuse (particularly heroin). Finally, the book also discusses pregnancy issues including abortion. If any of these issues may be troubling for you, I suggest you skip this book.

So, let’s talk about the ending – the part of the review that becomes much more negative. I vividly remember the campaigns surrounding this novel upon it’s release – #WTFThatEnding and labelled as “the most shocking ending you’ll read all year”. I agree with this, but for all the wrong reasons. The ending was so fantastical and supernatural, and was just so unrealistic! Yes, it was really shocking, but I thought it was shocking for the sheer unbelievability of the situation! An unpopular opinion, and I’m sorry to be so negative, but I really didn’t enjoy the ending.

Overall, I recommend this novel to those of you who enjoy more supernatural Thrillers – you’ll probably enjoy the ending much more than I did! A fantastic novel throughout, which had all the ingredients to become a “top shelf” read for me, but it fell apart at the end. But I’d still recommend giving it a go if you like the sound of the majority of the novel!

7 thoughts on “Book Review: ‘Behind Her Eyes’ by Sarah Pinborough”