Hello everyone, and welcome back to The Bookworm’s Fantasy! I hope you’re all doing well. Today I’m going to be posting my review of Sharon Bolton’s fantastic psychological thriller, ‘Little Black Lies’. I didn’t expect to enjoy this book as much as I did, so I just had to review it for you! Keep reading to discover my thoughts… 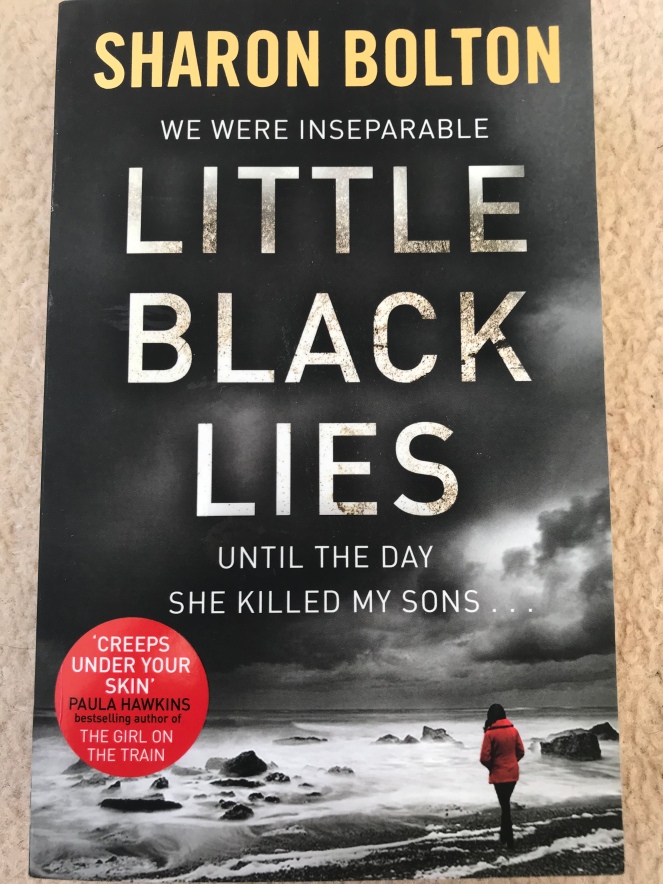 What’s the worst thing your best friend could do to you?

Admittedly, it wasn’t murder. A moment’s carelessness, a tragic accident – and two children are dead. Yours.

Living in a small island community, you can’t escape the woman who destroyed your life. Each chance encounter is an agonizing reminder of what you’ve lost – your family, your future, your sanity.

How long before revenge becomes irresistible?

With no reason to go on living, why shouldn’t you turn your darkest thoughts into deeds?

So now, what’s the worst thing you can do to your best friend?

The novel has received fantastic reviews, from the likes of Daily Express: “This tear-jerker novel is one of the year’s must reads”, Daily Mail: “An ever creeping sense of dread rises from every page” and Guardian: “A well-crafted cat’s cradle of lies and betrayals”. Other fellow authors have also praised the novel, such as Paula Hawkins: “It creeps under your skin and doesn’t let you go” and Linwood Barclay: “Bolton’s haunting storylines, vivid characters, and just plain great writing put her in the top tier of psychological thriller writers”.

‘Little Black Lies’ follows the lives of Catrin, Callum and Rachel, whose lives were all thrown into turmoil when Catrin’s two sons were killed by her best friend. Catrin is intent on getting revenge and making her friend pay for what she did – but then children on the small, close-knit Falkland Islands begin to go missing, and they start to question who they can really trust.

The novel is split into three parts, with each being narrated by one of the protagonists: Catrin, followed by Callum, and finally Rachel. All perspectives are narrated in the first person, giving a detailed insight to the characters’ thoughts, feelings and actions. Each perspective is also separated into days, beginning with Day Two and ended with Day Six (days since the first child disappearance). The structure is fairly simple to follow, and doesn’t allow for much confusion in terms of time.

Surprisingly, Callum was my favourite character in the novel. He’s a lovely, kind-hearted man, who always puts others before himself. He fought in the Falkland conflict and suffers with PTSD, with one of his main symptoms being flashbacks. He is deeply scarred by his time fighting, but his knowledge of the islands certainly gives him an advantage when he needs it. Throughout the novel, I was really rooting for his and Catrin’s relationship, hoping that they would end up together. He’s a very complex, but also realistic, character, and I found myself feeling a great deal of sympathy towards him.

Catrin is another brilliantly-constructed character. Three years after the death of her sons, she is still rightfully grieving. She has lost two children, another pregnancy, her husband and her following relationship, so she really has suffered a lot. But she’s very strong-willed and determined, and is intent on getting revenge on her best friend. She’s hard-working and very selfless, and she is brave enough to do things that others in her community wouldn’t dream of. Her knowledge of the wildlife and nature of the island is very extensive, making for a great depth of character.

Rachel is another fantastic character (as you can probably tell, I loved them all)! The reader doesn’t discover too much about her personally until part three – but I really was in for a shock! She’s willing to do anything to make Catrin forgive her for the terrible accident that cost her her sons, and she’s been punishing herself every day since. She’s a mother and wife, and seems to have it all on the surface – but deep down, many secrets are hidden, waiting to be unearthed.

Other characters in the novel include: Ben (Catrin’s ex-husband), Ned and Kit (Catrin’s deceased sons), Arthur, Jimmy and Peter (the missing children), Rachel’s children and husband, and various members of the island’s authorities and conservation. All characters bring something fresh and exciting to the novel, and I really enjoyed reading about all of them.

** TRIGGER WARNING ** (I apologise for any spoilers here.) As you can probably tell from the blurb, much of this novel is based around the theme of missing and deceased children. The novel also explores some pregnancy issues, including a stillbirth which Catrin suffers due to grief. Mental illness is explored in a lot of detail, namely grief, anxiety, depression, PTSD and suicide – with particular emphasis on Callum, who suffers with PTSD after the Falkland conflict. Finally, the novel also discusses animal slaughter and violence in some detail. All of these issues are explored with sufficient detail and very sensitively, but if you feel that they may trigger a negative response, then I would suggest you skip this book.

All three narratives motor onwards, until the truth is finally uncovered about what has been happening to the missing children. Catrin struggles with her grief and makes serious plans for revenge on Rachel; Callum battles his PTSD whilst attempting to search for the missing children; and Rachel battles her own family issues and the disappearance of her own son. The narrative increases in suspense and tension, and I simply couldn’t put it down.

So, let’s talk about the ending. That ending! Just when you think things are going to go one way, Bolton throws another curveball at you and completely reverses expectations. There are so many twists and turns at the end that I just didn’t know what to believe! But eventually, all the pieces of the puzzle fit together in the most shocking way. I could never have predicted that ending – in fact, I was way off! There is an epilogue section that occurs a year later which I felt was a bit sloppy, but other than that I loved the ending.

Overall, I highly recommend this to those of you who enjoy longer psychological thrillers, particularly if you’re interested in reading a book set in the Falkland Islands! The portrayal of the island-life there is fantastic, and I learned a lot about a setting which I didn’t know anything about before. This novel has brilliantly-constructed characters, a sound plot and a fantastic ending – what more could you want?! My only criticism is that perhaps, at some times, the depiction of the setting was a bit too heavy handed, causing the pace to fluctuate a bit. The book is also almost 500 pages long, which is a lot longer than my usual read – but that being said, I devoured it pretty quickly! A terrific read.