Hello everyone, and welcome back to The Bookworm’s Fantasy! I hope you’re all doing well. Today I’m really excited to be posting my review of Liz Lawler’s debut psychological thriller, ‘Don’t Wake Up’. I received this book for Christmas and just had to read it as soon as possible! Keep reading to discover my thoughts… 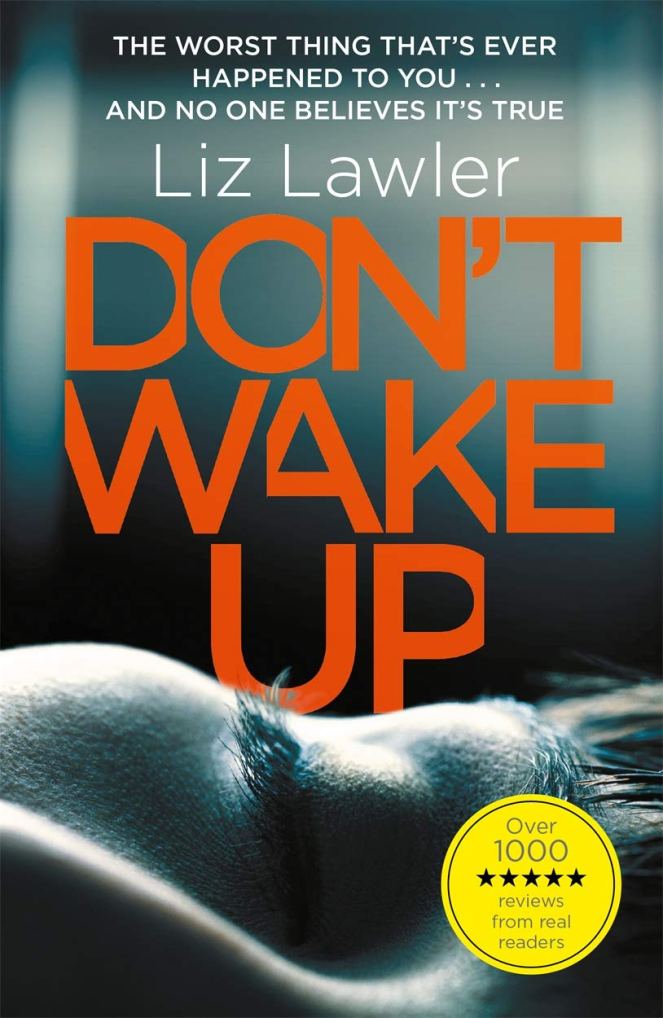 Alex Taylor wakes up tied to an operating table. The man who stands over her isn’t a doctor.

The choice he forces her to make is utterly unspeakable.

But when Alex re-awakens, she’s unharmed – and no one believes her horrifying story. Ostracised by her colleagues, her family and her partner, she begins to wonder if she really is losing her mind.

And then she meets the next victim.

** TRIGGER WARNING ** Contains scenes describing explicit medical procedures, including very intimate procedures such as illegal abortion and a vulvectomy. Describes medical scenes in a hospital in explicit detail, including references to life-threatening injuries. Explores the theme of sexual assault in great detail, including scenes of rape. Contains references to very complex mental illnesses, including scenes of self-medication, addiction and suicide. Explores the issue of corruption within the police force.

‘Don’t Wake Up’ (October 2017) is Liz Lawler’s debut novel. Lawler was born in Chantham and partly raised in Dublin, and is one of fourteen children. She spent over twenty years working as a nurse, and has also worked as a flight attendant and manager of a hotel. She now lives in Bath with her husband.

Many readers have praised the book, with positive quotes including the following: “A gripping read right up to the end … fast-paced, well written and exciting”, “Full of twists … one of the best books I’ve read in a while” and “A perfect balance of suspense, drama, crime and mystery”. Fellow author Angela Marsons also praised the novel, labelling it “Outstanding … a rollercoaster of a read”.

‘Don’t Wake Up’ tells the story of doctor Alex Taylor, who wakes up one day tied to an operating table. The man standing over her does unspeakable things to her, and forces her to make a life-changing decision. When Alex wakes up again, she’s perfectly healthy, and nobody believes her story. Is it all in her mind?

The narrative is told in the third-person, with different chapters/sections focusing on different characters. Alex is the main character and is therefore described the most, but other characters are also explored in great detail. The story is narrated in the present-tense throughout, with some allusions to the past. The narrative is very easy to follow, but is still very effective.

Of course, my favourite character in the novel is Alex. She’s an intelligent and hard-working doctor, with years’ of experience and expertise. She leads a good life: engaged to long-term partner Patrick and with a fantastic job, what more could she want? But she also has many flaws, and has experienced some true horrors in the past that she has buried deep below the surface. She’s insecure and has low self-esteem, and doesn’t trust anybody after the attack. At first, after the attack, she is strong-willed and determined to bring her attacker down – but she soon begins to lose faith in her own judgement, and questions her own sanity. Alex is really relatable and down to earth, and she’s an excellently-written character.

Alex’s boyfriend Patrick is a successful vet, and he is passionate about caring for animals. But he’s arrogant and self-centered, and is quick to doubt Alex when no physical evidence arises from the attack. He does care about Alex but he makes many mistakes in their relationship, and he is unable to move past his own opinions in order to help his fiancee. He only seems to look out for himself and his own interests, rather than anybody else’s. I really didn’t like Patrick, but he was a well-written character.

Police officer Greg is assigned Alex’s case, but when no physical evidence emerges of her being attacked, he is quick to dismiss her. But soon, more crimes are committed, and it becomes clear that they are all somehow connected to Alex. Greg is a hard-working, determined police officer, with years’ of experience. But he too has made some mistakes, which have put him in a very awkward position in the workplace. He’s a very kind-hearted man who believes in the good in others, but he struggles between his gut instincts and the actual facts in front of him. He must put everything he has into finding out the truth and bringing justice.

Other characters in the novel include: Fiona, Maggie and Nathan (Alex’s colleagues), Caroline (Alex’s boss), Laura Best (police officer), Amy Abbott and Lillian Armstrong (other victims), Oliver (an actor who shadowed Alex at work), and various other members of the A&E department and other police officers. All of the characters bring something fresh and exciting to the novel, and all are needed to tell the story.

** TRIGGER WARNING ** This novel contains scenes that explicitly describe very intimate medical procedures, such as illegal abortion and a vulvectomy. The female anatomy is described in great detail in these scenes. The novel also describes scenes that occur in hospitals in great detail, including the grizzly details of life-threatening injuries and excessive blood loss, for example. The theme of sexual assault is explored, including repeated references to and describing scenes of rape. Mental illness is also explored in detail, including descriptions of self-medication, addiction (particularly alcoholism) and suicide. Finally, the issue of corruption and bias within the police force is explored. All of these issues are explored sensitively and with sufficient detail, although I will admit that some scenes were difficult to read for me personally. If any of these issues may trigger a negative response, I suggest you skip this book.

As the narrative motors onwards, more and more crimes are committed. The link between these crimes is unclear and bizarre, and they all point to one suspect. The police force must work around the clock to uncover the truth and restore justice, and the team at the hospital must pull all their resources and staff together in order to save lives. But will they be too late?

So, let’s talk about the ending! There’s a huge twist which I definitely never saw coming – I couldn’t believe it! As soon as this twist is revealed, it becomes a race against time in order to save innocent lives. I was literally on the edge of my seat during the ending – I just had to keep reading to find out if they would catch the criminal! I was really satisfied with the ending, and felt that it tied everything together brilliantly.

Overall, I highly recommend this to those of you who enjoy psychological thrillers, particularly those of you who may have some interest in the medical profession (and are able to stomach the graphic content!) I thoroughly enjoyed the book from beginning to end, and it was unlike anything I’ve ever read before. I will say that I found some scenes very difficult to read, and at times it was too graphic for me – but overall I felt that the characters and the story were fantastic!

One thought on “Book Review: ‘Don’t Wake Up’ by Liz Lawler”