Hello everyone, and welcome back to The Bookworm’s Fantasy! I hope you’re all doing well. Today I’m posting my review of Harriet Tyce’s debut psychological thriller, ‘Blood Orange‘. I was lucky enough to be sent an ARC of this – thanks so much to Wildfire for the opportunity! Keep reading… 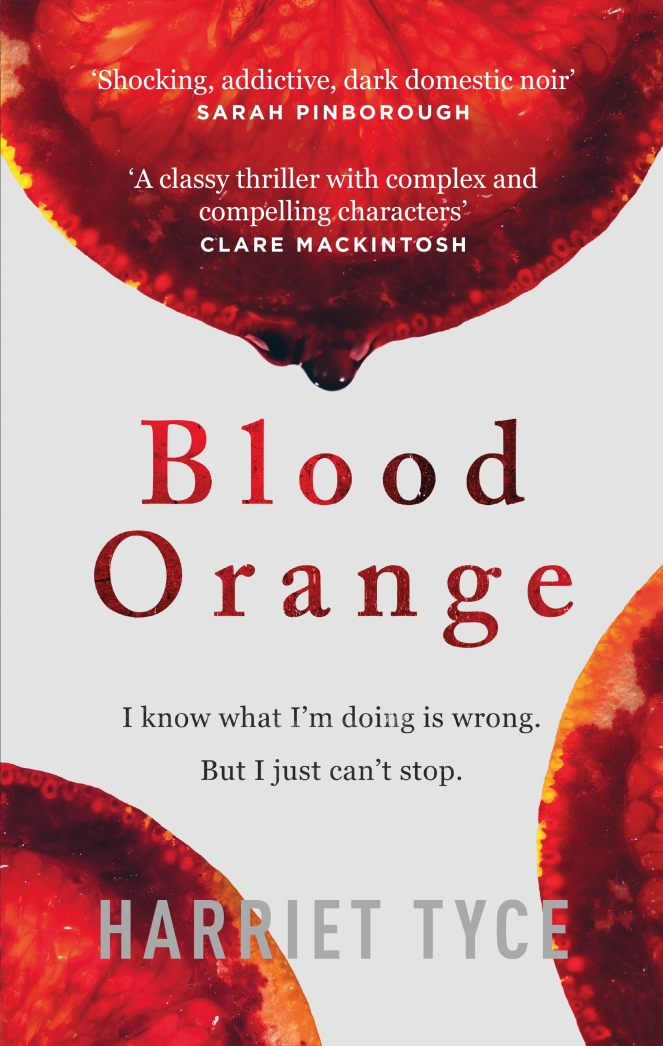 Alison has it all. A doting husband, adorable daughter, and a career on the rise – she’s just been given her first murder case to defend. But all is never as it seems…

Just one more night. Then I’ll end it.

Alison drinks too much. She’s neglecting her family. And she’s having an affair with a colleague whose taste for pushing boundaries may be more than she can handle.

I did it. I killed him. I should be locked up.

Alison’s client doesn’t deny that she stabbed her husband – she wants to plead guilty. And yet something about her story is deeply amiss. Saving this woman may be the first step to Alison saving herself.

I’m watching you. I know what you’re doing.

But someone knows Alison’s secrets. Someone who wants to make her pay for what she’s done, and who won’t stop until she’s lost everything….

‘Blood Orange’ is Harriet Tyce’s debut novel, and it was released earlier this week on 21st February 2019. Harriet Tyce grew up in Edinburgh and studied English at Oxford Uiversity, before completing a law conversion course. She practised as a criminal barrister in London for nearly a decade. She now lives in north London.

The book has received rave reviews, from the likes of Good Housekeeping: “A heart-pounding thriller … and deliciously twisty plot” and Daily Express: “This thriller breathes new life into the domestic noir genre and grips until the final page”. Many fellow authors have also praised the novel, such as Clare Mackintosh: “A Classy thriller with complex and compelling characters”, Lisa Jewell: “Dark, original and utterly compelling, I could not put it down” and Kate Hamer: “Blood Orange drags you right into the hearts of the flawed characters and their stories from the get go”.

‘Blood Orange’ tells the story of Alison, a lawyer who has just been given her first murder case to defend. But Alison has many flaws and her own life is falling to pieces, and somebody is watching her… How can she defend a murderer when she’s close to losing everything?

The novel is narrated from the first-person perspective of Alison, providing the reader with an in-depth insight to her thoughts, feelings and emotions. The story is told in the present tense, with some allusions to the past, giving the sense of immediacy ad increasing suspense. The narrative structure is very easy to follow, but is still very effective.

Alison is my favourite character in the novel. At first I really disliked her, but I began to feel more sympathy for her as the story went on. She’s selfish and impulsive, and she neglects her daughter and her husband. She doesn’t realise how lucky she is, and she foolishly takes her loved ones for granted and almost throws them away. She has an awful lot of flaws, and her drinking problem is spiralling out of control. She wants to change, but something is holding her back. But she does eventually see sense and tries to win her loved ones back. She’s deeply troubled and is a very realistic character, and I really felt a great deal of sympathy towards her.

Alison’s husband Carl is a fantastic father to their daughter, and he is a stay-at-home dad. He begins to get fed up of Alison’s selfish behaviour and he has no sympathy towards her – he can be quite cruel at times. But there’s a hidden side to Carl’s personality that I never saw coming, and he has many secrets lurking beneath the surface. Even though I didn’t like him very much, I can appreciate that he is a very well-written, three-dimensional character.

Alison is very close to her co-worker Patrick, and she reveals much more to him than she does to her husband. They work together on the murder case, and they make a good team. He’s hard-working and is passionate about clearing his client’s name. Patrick appears to be very shady and sleazy, and it definitely seems like he is hiding something from the very beginning. But Patrick is not who he appears to be, and he too has a dark side. Patrick was also a very well-written character.

** TRIGGER WARNING ** (I apologise for any spoilers here.) The novel is centred around a brutal murder case, of which Alison is defending the accused. It explores all the grizzly details of the case, including references to the wounds obtained and the physical evidence. The novel explores the theme of domestic abuse, including references to physical, emotional and sexual abuse. Some scenes are very disturbing and describe brutal acts of violence. The theme of addiction is explored in the novel, particularly Alison’s worsening alcoholism. The novel includes multiple scenes of a sexual nature that describe explicit sexual acts. Finally, the theme of pregnancy issues and infertility is explored in the novel. All of these issues are explored with appropriate sensitivity, but if you feel that any of these may trigger a negative response, I suggest you skip this book.

As the narrative motors onwards, Alison’s life spirals more and more out of control. She begins to lose everything around her, and her family life is crumbling. She attempts to defend her client, but is unsure about whether she should fully trust her. Alison is repeatedly targeted by an unknown stalker, who is threatening her life… Will Alison clear her client of all charges? Will she ever be free of her own troubles?

So, let’s talk about the ending! There’s an astounding twist at the end of the book that I definitely never saw coming! I was in disbelief for a while, and had to keep re-reading the sentence to make sense of it all. From then on, things begin to improve, and I was very satisfied with the ending as it left me feeling hopeful for Alison’s future. I really enjoyed the ending, and felt that it tied everything together brilliantly.