Hello everyone, and welcome back to The Bookworm’s Fantasy! I hope you’re all doing well. Today I’m posting my review of Graham Moore’s latest legal thriller, ‘The Holdout’! I was sent an ARC by Orion Books, and ended up really enjoying it, so I just had to review it for you. Keep reading to discover my thoughts… 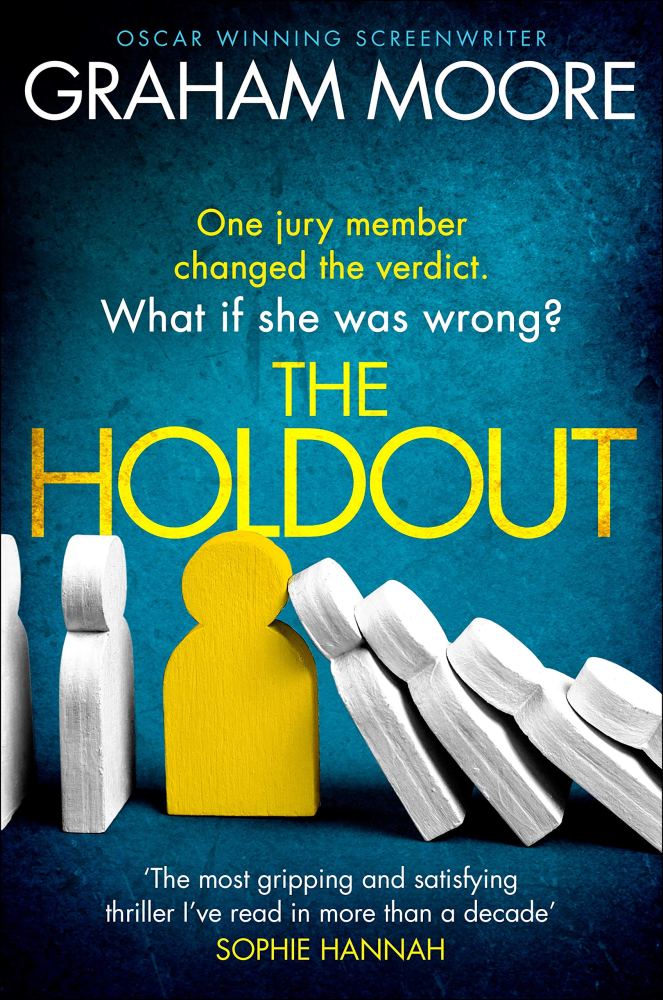 One juror changed the verdict. What if she was wrong?

‘Ten years ago we made a decision together…’

Fifteen-year-old Jessica Silver, heiress to a billion-dollar fortune, vanishes on her way home from school. Her teacher, Bobby Nock, is the prime suspect. It’s an open and shut case for the prosecution, and a quick conviction seems all but guaranteed.

Until Maya Seale, a young woman on the jury, persuades the rest of the jurors to vote not guilty: a controversial decision that will change all of their lives forever.

Ten years later, one of the jurors is found dead, and Maya is the prime suspect.

The real killer could be any of the other ten jurors. Is Maya being forced to pay the price for her decision all those years ago?

** TRIGGER WARNING ** The novel is centred around the theme of  murder, exploring all the grizzly details of the crime and subsequent trial. Explores the theme of sexual assault, including references of rape.

‘The Holdout’ (20th February 2020) is Graham Moore’s third novel, following on from ‘The Sherlockian’ (2010) and ‘The Last Days of Night’ (2016). Moore is the Academy Award-winning screenwriter of The Imitation Game, which also won a Writers Guild of America Award for best adapted screenplay and was nominated for a BAFTA and a Golden Globe. Moore was born in Chicago, received a BA in religious history from Columbia University in 2003, and now lives in Los Angeles.

The novel has received fantastic reviews, from the likes of authors AJ Finn: “Plunge a syringe filled with adrenaline into the heart of Twelve Angry Men and you’ve got The Holdout,” Sophie Hannah: “The most gripping and satisfying thriller I’ve read in more than a decade,” Caroline Kepnes: “A tense, emotionally charged, scary-good, stand-out read” and Sarah Pinborough: “Quite the tour de force!”

‘The Holdout’ tells the story of Maya Seale, who was the holdout on a jury during a high-profile murder case. Fast forward 15 years – one of the jury members is found dead, and Maya is accused. Was Bobby Nock guilty or innocent all those years ago? And who really killed Rick?

The book consists of two distinct narratives: the past murder trial that took place 15 years ago, and the present investigation into Rick’s death. Both stories are narrated in the third person, switching between the characters of Maya, Rick and their fellow jurors. The reader is given an insight to her thoughts, feelings and emotions, as well as discovering objective facts about the case. The narrative is fairly simple to follow, yet still very effective.

My favourite character in the novel is Maya. When Maya is selected for jury service all those years ago, she is unhappy about being taken away from her other responsibilities. As the trial goes on, it becomes clear to her that Bobby is innocent, and she will do everything she can to release this wrongly-accused man. She’s strong-willed, determined and cunning, and manages to convince all her fellow jurors to vote not guilty. In the present day, Maya is a lawyer herself, who becomes tangled up in another murder case. She begins to doubt whether she was right to acquit Bobby all those years ago, and sets about discovering what really happened to Jessica Silver. But deep down, Maya is vulnerable and is utterly terrified at the thought of being imprisoned for the rest of her life. Maya is an excellently-written, three-dimensional character, and I really enjoyed discovering more about her as the narrative progresses.

Rick also served on the jury for Bobby Nock’s case, and he does everything he can to try and wriggle his way out of it. He’s an intelligent student who has no interest in sitting in a courtroom for days on end. He is immediately drawn to Maya, and their relationship blossoms during their period of service. Throughout the trial, Rick assumes that Maya will vote guilty, and when he learns that she wants to acquit Bobby, he is absolutely furious. Their relationship is tested, and Rick must make some very important decisions that will have an impact on the rest of his life. Rick is a very interesting character, and I especially enjoyed reading about his relationship with Maya.

** TRIGGER WARNING ** (I apologise for any spoilers here.) This novel consists of not one, but two murder cases, and so it is fair to say that the theme is explored in great detail. All the grizzly details of the crimes are disclosed, including references to physical violence and post-mortem results. As the crime is debated in court, issues such as prejudice, racism and sexism are addressed. The theme of sexual abuse is also explored throughout the novel, including references to acts of sexual assault and rape. All of these issues are explored with appropriate sensitivity – however, if you feel that any of these issues may be triggering, I suggest you skip this book.

Both narratives greatly increase in mystery and suspense. In the past narrative, the case is nearing its end, and we discover the exact outcome of the trial. In the present day, Maya investigates whether Bobby was really innocent all those years ago – making some extremely shocking discoveries along the way. Will we ever find out the truth?

So, let’s talk about the ending! There’s a fantastic end scene in which the truth is finally revealed. The ending is shocking and dramatic, and I simply couldn’t tear my eyes away! All the events within the novel are tied together fantastically, and we finally discover what really happened all those years ago. I was really satisfied with the ending to the book.

Overall, I highly recommend this novel to those of you who enjoy reading legal thrillers, especially if you enjoy murder mystery cases. This novel has a fantastic premise which I felt was executed brilliantly. The main character is excellently-written, and the novel features a great deal of suspense and mystery. My only criticism is that I was slightly more invested in the past narrative than the present-day narrative – but that being said, the narratives do work very well together!

One thought on “Book Review: ‘The Holdout’ by Graham Moore”