Hello everyone, and welcome back to The Bookworm’s Fantasy! I hope you’re all doing well. Today I’m posting my Monthly Reads for March 2020. March was a busy month for me – with the UK lockdown starting and all the anxieties that came with that, as well as needing to finish a lot of work off in anticipation of going on furlough from 1st April, I didn’t get too much reading done! I managed to read 4 books during March. So, keep reading to discover which books I read last month…

She only looked away for a second…

Anne White only looked away for a second, but that’s all it took to lose sight of her young daughter.

And as Anne struggles to connect with her teenage daughter, she begins to question how much Abigail remembers about the day she disappeared…

(I was sent an ARC by HQ.) This book was decent, but it definitely wasn’t anything special. I was really intrigued by the premise and the opening to the novel was pretty strong. But I soon found myself losing interest. The characters were quite flat and I really disliked the ending most of all. But something made me want to keep reading … I can’t quite put my finger on what it was! A bit of a disappointing read for me.

The Silent House by Nell Pattison.

If someone was in your house, you’d know … Wouldn’t you?

But the Hunter family are deaf, and don’t hear a thing when a shocking crime takes place in the middle of the night. Instead, they wake up to their worst nightmare: the murder of their daughter.

The police call Paige Northwood to the scene to interpret for the witnesses. They’re in shock, but Paige senses the Hunters are hiding something.

One by one, people from Paige’s community start to fall under suspicion. But who would kill a little girl?

Was it an intruder?

Or was the murderer closer to home?

(I was sent an ARC by Avon.) I was lucky enough to take part in the blog tour for this book – you can find that here. I really enjoyed the first two thirds of this novel. The characterisation of the protagonist, Paige Northwood, was excellent, and overall this was a unique and original premise. However, I really disliked the ending – I found it so ridiculous and far-fetched. So unfortunately, the ending totally let this book down for me!

Someone We Know by Shari Lapena.

It can be hard keeping secrets in a tight-knit neighbourhood.

In a tranquil, leafy suburb of ordinary streets – one where everyone is polite and friendly – an anonymous note has been left at some of the houses.

‘I’m so sorry. My son has been getting into people’s houses. He’s broken into yours.’

Who is this boy, and what might he have uncovered? As whispers start to circulate, suspicion mounts.

And when a missing local woman is found murdered, the tension reaches breaking point. Who killed her? Who knows more than they’re telling? And how far will all these very nice people go to protect their secrets?

Maybe you don’t know your neighbour as well as you thought you did . . .

This book was pretty mediocre. The characters were well-written and the plot was fairly engaging. However, my main issue with this book is that I just felt it was SO unoriginal. I feel like the premise of not being able to trust your neighbours is so overdone now, and unfortunately this book just didn’t really excite me. I carried on reading as I wanted to find out the resolution … but I was left feeling fairly unmoved by this book. I was pretty disappointed as I’ve really enjoyed Shari Lapena’s previous novels.

Who Did You Tell by Lesley Kara. 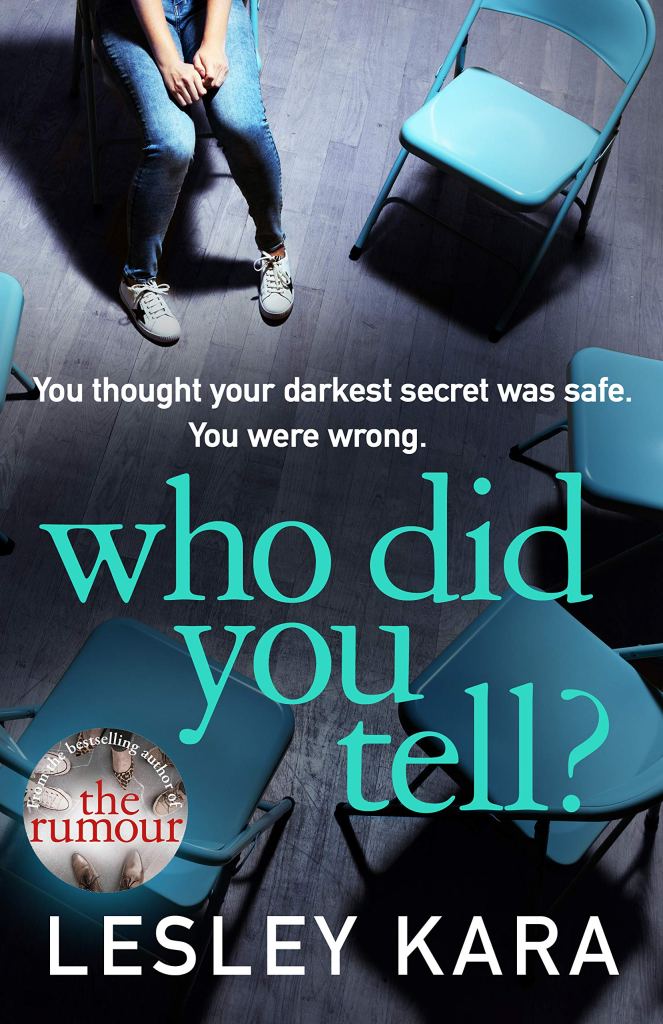 It’s been 192 days, seven hours and fifteen minutes since her last drink. Now Astrid is trying to turn her life around.

Having reluctantly moved back in with her mother, in a quiet seaside town away from the temptations and painful memories of her life before, Astrid is focusing on her recovery. She’s going to meetings. Confessing her misdeeds. Making amends to those she’s wronged.

But someone knows exactly what Astrid is running from. And they won’t stop until she learns that some mistakes can’t be corrected.

(I was sent an ARC by Bantam Press.) I won’t go into too much detail now, as I’ll be reviewing this book in full – keep your eyes peeled for that! I absolutely adored this book. The main character, Astrid, is fantastically-written, and the theme of alcoholism is explored brilliantly. The story is full of suspense and drama, and I was hooked from the very first page. There was something missing to be able to award this book 5 stars, but I can’t quite put my finger on what that was. A truly compelling psychological thriller!